Twin Spin is a Net Entertainment online slot that has a traditional 5×3 layout. There is no bonus round or free spins, but it does have synchronizing reels, which means that each spin will land similar symbols on two to all five reels.

Whether you enjoyed old school casino slots or you’re a modern video slots enthusiast, NetEnt’s Twin Spin covers all your interests. Read on to learn what sets Twin Spin apart from other slots.

Released recently in 2013, the Twin Spin video slot has exclusive features that can easily make a modern slot player pleased while keeping the old-school Vegas player entertained throughout the session. Let’s unearth the unique features of the game.

Playing any slot starts by choosing a fitting bet amount, placing your wager and spinning. Like other NetEnt games, you can adjust the game’s bet size by choosing different bet levels (from one to ten) and coin values (from $0.01 to $0.50). Your bet value at each spin will therefore be bet level multiplied by coin value multiplied by ten.

Special Features in The Game

If you got to the floor of one of the Downtown Vegas casinos, the features and symbols you most likely encountered are the cherries, Bar Symbols, and bells. Well, Twin Spin arouses all these combinations and goes an extra mile with the neon lights and the funky jazz music tracks of the 1970s playing in the background.

For the thriller-lovers of modern slots, the game comes with a high/medium volatility, which keeps you pulsating during every spin and watching out for massive wins. The five reels and three-row game also brings the newest “Twin Reel” feature that’s a first in the slot category and up to 243 winning ways.

Twin Spin features the Diamonds, Lucky Sevens, Cherries, Bells, BAR, and Ace through to 10, which all form winning combinations with three or more of a kind in a line, starting from the farthest left. Unlike most NetEnt like for example the popular slot Sam on the Beach, which come with tons of bonus features and free spins, this game is an exception. Markedly, it avails a new feature that can maximize your winnings after every spin.

During a spinning session, the game automatically chooses two of its reels to end when the spinning stops. This feature gives the game its name, and when the Twin Reels expand, you get luckier with massive wins and mega payouts.

The highest paying symbol in Twin Spin is the Diamonds, five of which earn up to 1000 coins, followed by Luck Seven, five of which attract 500 coins. The BAR follows next with 400 coins, bells and cherries at 250 coins, while A, K, and Q each award 40 coins for five identical symbols. The lowest paying are 9 and 10, which award 25 coins each for five combinations.

At the left and right of the reels, you will see the number 243. This number shows you how many ways you can win playing the game. Numerous right? This is because, unlike most slot games that only pay for combinations on a straight line, this game doesn’t require the winning lines to form a straight line. For instance, a combination of two bells in a straight line and one bell on the next reel below the line will still award you a win. 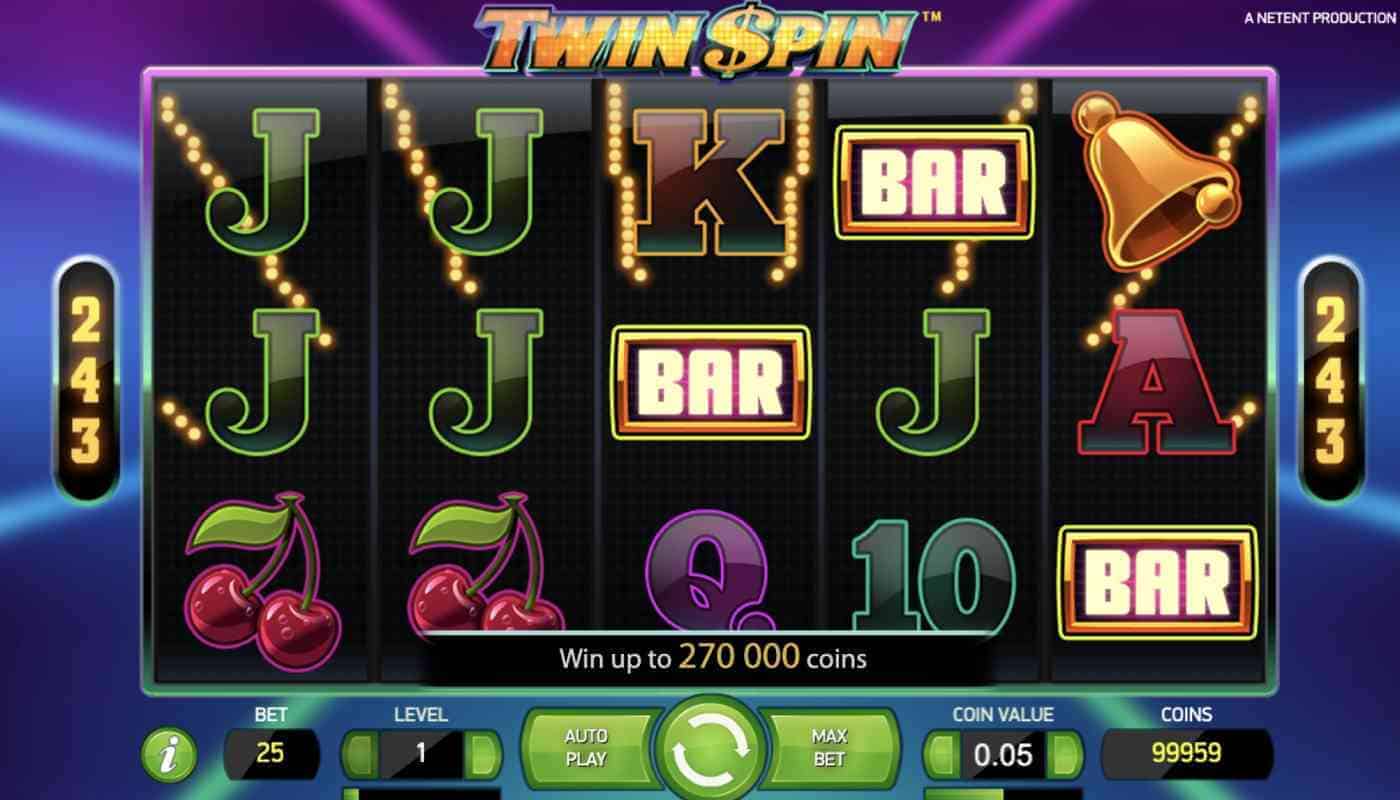 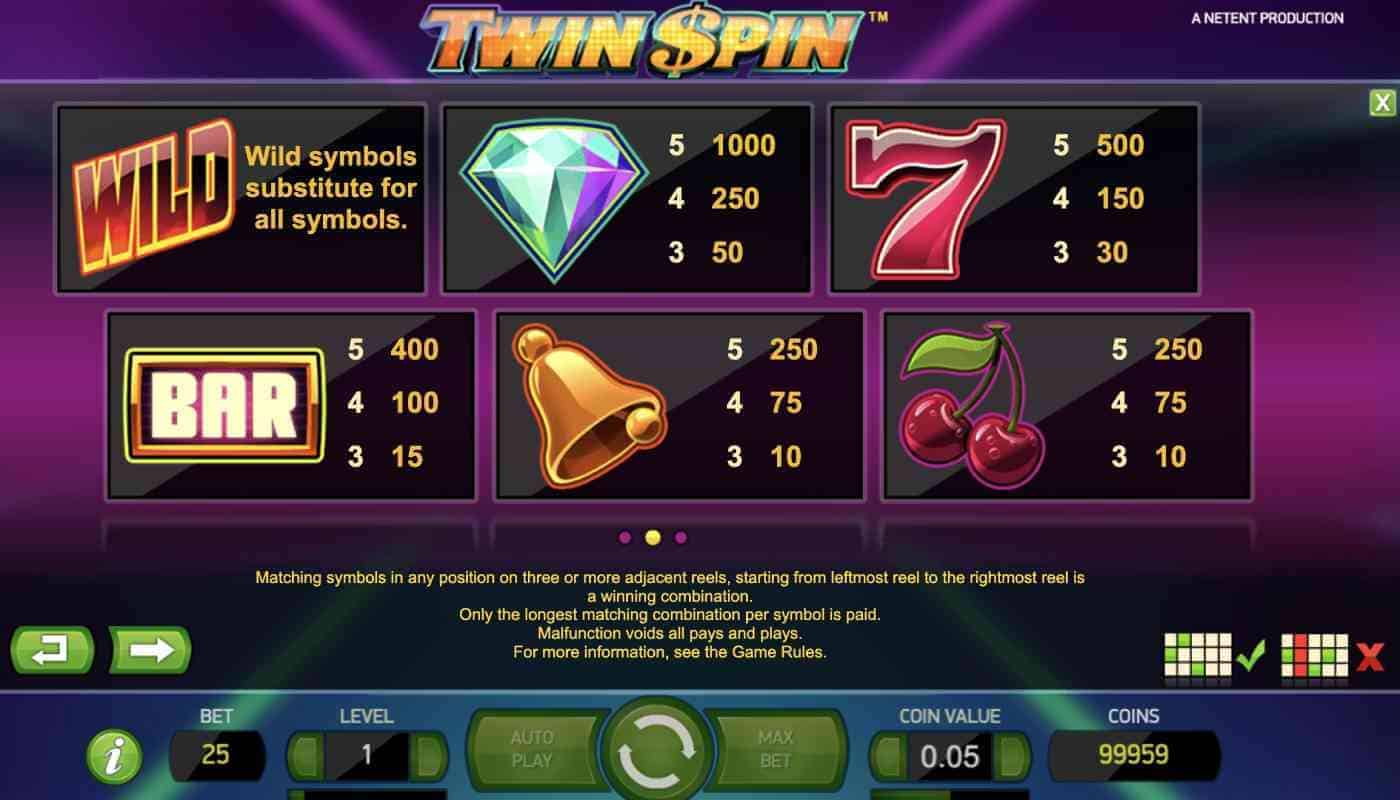 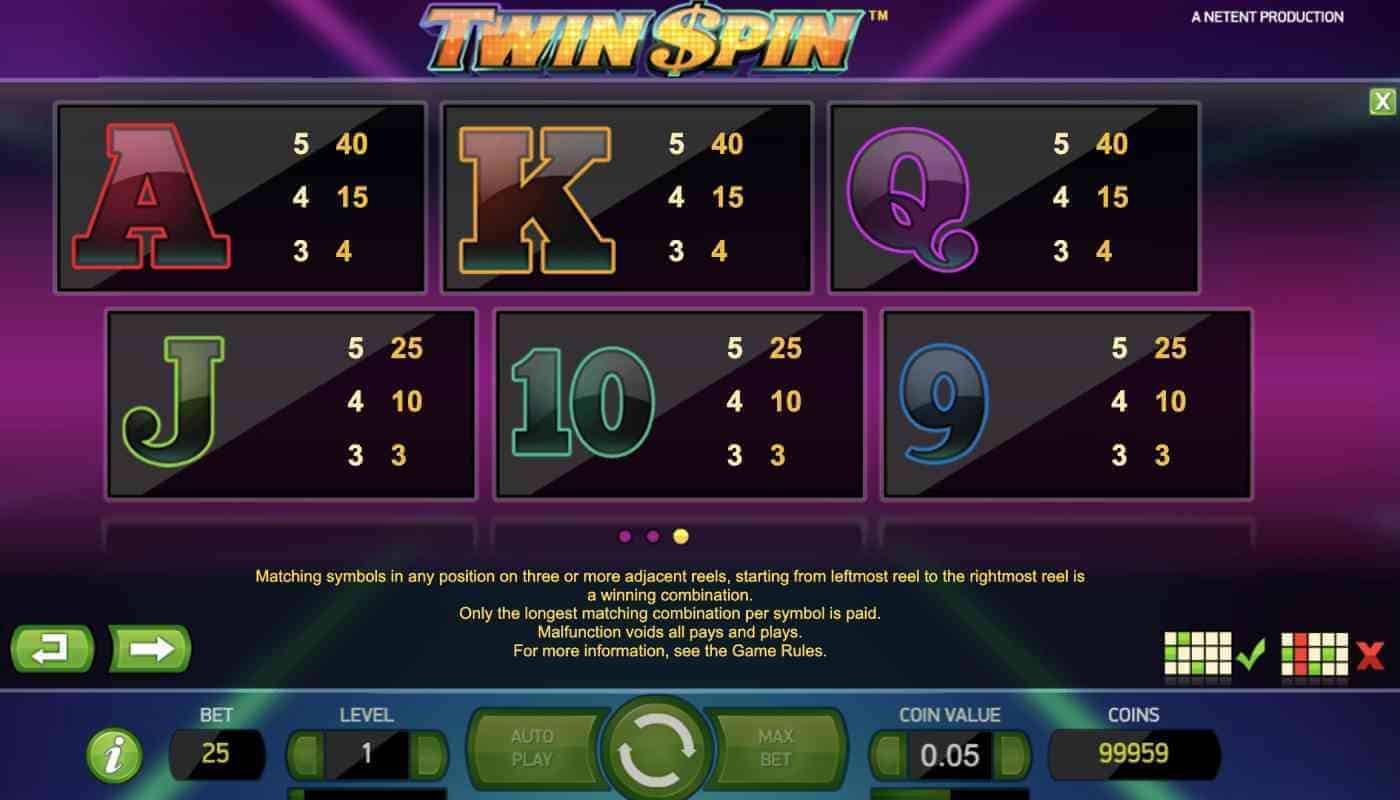 Twin Spin doesn’t have any bonus rounds and free spins. But it has the best offer that can translate into the biggest winnings. The twin reels can expand into quadruplets or even more to fill all the reels. If this happens, you can have multiple winning lines, resulting in increased winning chances and amplified earnings.

The game may not have the bonus rounds and free spins that form part of video slots, but it offers more than most of these slots. It’s a new innovative, and trendsetting piece of work that many other slots may adopt soon. With an RTP of 95.55%, you are sure to receive enormous wins on every gameplay.